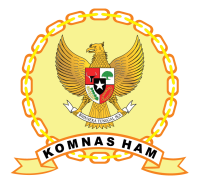 Komnas HAM is an independent institution that is at the same level as other state institutions which functions to carry out studies, research, counseling, monitoring, and mediation of human rights. This is stated in Article 1 of Law Number 39 Year 1999 concerning Human Rights.
Legal Foundation

Initially, Komnas HAM was established by Presidential Decree Number 50 of 1993 concerning the National Commission on Human Rights. Since 1999 the existence of Komnas HAM has been based on laws, namely Law Number 39 of 1999 which also stipulates the existence, objectives, functions, membership, principles, completeness and duties and powers of Komnas HAM.

Komnas HAM, based on Law Number 40 of 2008 concerning the Elimination of Racial and Ethnic Discrimination, has received additional authority in the form of supervision. Supervision is a series of actions carried out by Komnas HAM with the aim of evaluating government policies both at the central and regional levels which are carried out periodically or incidentally by monitoring, finding facts, assessing in order to find and discovering whether there is racial and ethnic discrimination followed up with recommendations.